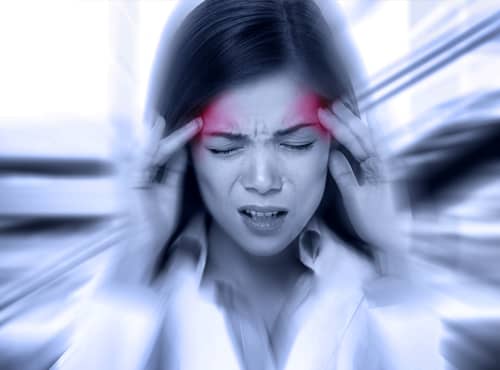 Migraine causes severe throbbing pain, usually on one side of the head, followed by nausea, vomiting, dizziness, difficulty speaking, numbness, tingling, and extreme sensitivity to light and sound. The pain usually lasts for hours to days and interferes with your ability to do daily activities.

A warning sign known as an aura occurs before or with a headache. An aura means visual disturbances such as flashes of light or blind spots or others.

Migraine is a neurological condition that may begin early in childhood or may not occur until early adulthood. Women are more likely to experience migraine attacks than men do. Family history also plays a role in the occurrence of migraines.

The diagnosis of migraine is done on the basis of clinical history, reported symptoms, and by ruling out other causes.

On top of it, it is important to understand that migraines are different from other headaches.

Migraines, which affect children and adults, advance through four stages: prodrome, aura, attack, and post-drome. But not necessarily everyone undergoes all these stages.

Migraine may come with alarming signs a day or two days before the actual attack. Signs may include:

An aura is a visual disturbance that may appear before or during migraines. Auras are reversible signs of the nervous system. The signs become apparent gradually and may last for up to 60 minutes.

Examples of migraine auras include:

A migraine headache usually lasts from 4 to 72 hours if left untreated. The signs may vary from person to person, and so does the intensity. In some people, migraines may occur rarely or appear a few times a month.

Post-drome brings signs like confusion and a feeling of nausea for a couple of days. Pay attention to the signs you are experiencing, or else sudden moments may bring throbbing pain once again.

Most often, migraine attacks are left untreated and undiagnosed. If you feel signs of migraine, keep a record of the signs. Even if a headache has been a common problem for you, these signs should not be ignored.

Scientists have not fully understood the underlying cause of migraines. But genetics, environmental factors are to blame in most cases.

Changes in the brainstem and its signals with trigeminal nerves are also a cause. Other causes include imbalances in the brain chemicals such as serotonin, which help regulate pain in the nervous system.

Migraine triggers include conditions that prompt migraine headaches. These may include:

In Ayurveda, the management of migraine is referred to as Ardhavabedhaka, which means pain on one side of the pain. Migraine is linked to Vata and Pitta dominance in the body which causes a burning sensation in the eyes followed by redness. It is also imputed to severe acidity attacks and digestive system issues.

The ayurvedic management of migraines is done with the help of toxins elimination as carried out by Panchakarma.

At AyuKarma, we have time-tested and evidence-based procedures to manage migraines naturally. Diet and lifestyle modifications are also suggested to the patients to get the most out of ayurvedic treatment.