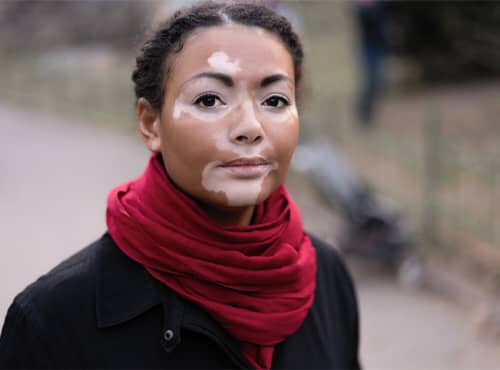 Leucoderma is also called achromoderma. It is marked by the destruction of melanocytes in the body. As they become damaged, they no longer produce skin pigment, called melanin. Once the cells no longer generate melanin, the area of your skin loses its color or turns white.

Usually, the white patches are confined to a small area in the beginning. However, as time passes, the skin enlarges and spread. Changes in the skin are often noticeable around the age of 10 to 35 years. Although patches are visible, those with darker skin complexions have noticeable pigmentation of the skin.

Leucoderma is a rare condition.

The white patches can develop anywhere on the body, including:

If the portion of the body affected has hair, it may turn white or grey.

There are many causes of leukoderma, some of which include:

Who may get Leucoderma?

Anyone can experience leucoderma and its signs. Usually, the signs of leucoderma begin in the early stages of life. But in rare cases, individuals develop the signs after the age of 40. Men and women are likely to be affected equally.

The most common sign of leucoderma is white patches on the skin. The patches may appear on any part of the body, in many cases, around the eyes as well. The patches can be small or large and appear as:

The most common complication related to leucoderma is the effect on the eyes and ears. The loss of skin pigment increases the risk for sunburn in many.

Research has revealed the effects of leucoderma on psychological health. More than 50% of people with leucoderma experience stressful conditions once in a lifetime. Perhaps, some people go on thinking about their health throughout time, which results in depleted mental and emotional energy.

If you have leucoderma and you are experiencing anxiety and depression because of it, talk to your doctor. Talk to your family and friends as much as you can. This will bring down emotional turmoil and alleviate stress.

Leucoderma will not develop into other medical conditions, but patients with leucoderma may experience complications such as loss of hearing, painful sunburns, and changes in vision.

According to the modern-day science of Medicine (Allopathy), leucoderma has no cause known. It is believed to be an autoimmune condition in which the healthy cells start to attack the body. In Ayurveda, Leucoderma is related to 'Shweta Kushtha' or 'Kilasa' or 'Switra'.

Leucoderma or "Shweta Kushta" is a disease caused by the amplification of "Pitta" in the body. Pitta is ayurvedic humor that indicates fire elements and is manifested in the form of skin disorder.

The Pitta dosha is of five types, in which Bhrajak Pitta gives discoloration to the skin.

When you have leucoderma, it means Bhrajak Pitta is imbalanced. Due to this, toxins may start to accumulate in the body. As more and more Ama is introduced, cells and tissues start to lose their function. The result is depigmentation of the skin.

The disease is deeply rooted and demands treatment at a cellular level. Ayurvedic treatment usually includes medicinal herbs, diet plans, and therapies to calm Pitta's aggravation and cleanse 'Ama' from the body.

The purification method usually involves 'Snehana and Svedana' to liquefy Ama so that your body gets rid of it.