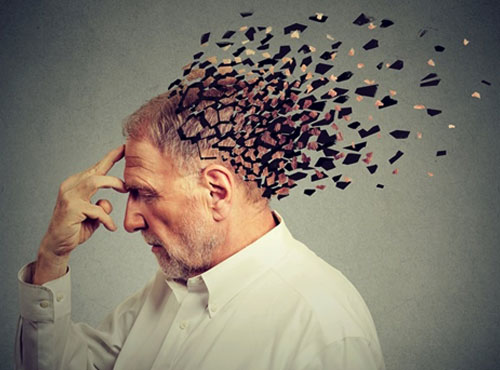 Alzheimer’s is a form of dementia that affects memory, thinking, and cognitive learning. It is a progressive neurological disorder that causes the brain cells to shrink and die.

Alzheimer’s results in a decline in the person’s thinking, behavioral, and social skills and keep them off from leading a normal life.

Yearly, millions of people have Alzheimer’s that require them to be admitted to inpatient care.

The early and frequent signs of the disease include forgetting events or conversations. As the condition advances, a person with Alzheimer’s may have a hard time living a routine life as they tend to forget daily activities. The complications in the later stages may become severe- such as malnutrition, dehydration, and persistent infections.

Allopathic medications temporarily help to slow down the progression of signs or symptoms and improve function, and maintain independence.

Ayurvedic treatment is a comprehensive approach to detox the mind and body of toxins, slow down brain aging, and improve memory.

In Alzheimer’s, the cells in the brain start to die due to aging. Initially, it is common to experience slow thinking and problems in remembering certain things. However, confusion and memory loss begin with changes in the way our brain functions.

It begins in the parts of the brain that deal with learning. In the initials stages, one may experience changes in mood, behavior changes, changes in sleeping, confusion, irritability, aggressiveness, disorientation, losing things from the mind, not remembering time and place, staying suspicious about family members and caregivers, difficulty swallowing, speaking, and walking.

People with Alzheimer’s may not accept the fact that they have a problem. The signs become apparent to others as the condition speeds up.

A number of conditions may result in memory loss or reduction in cognitive behavioral habits. If you are concerned about your poor memory or other thinking skills, it is important to talk to your doctor and learn the reason.

Doctors don’t fully understand the cause of Alzheimer’s. But it is believed that when brain proteins fail to work properly, this allows brain cells, called (neurons) to trigger toxic events. Eventually, neurons lose their connection with each other, are not able to communicate, and die eventually.

Alzheimer’s is also known to be an occurrence of lifestyle, environmental, and genetic disorders. These factors ultimately affect the brain’s functioning over time and result in depleted cognitive abilities.

The damage occurs in the parts of the brain involved in memory. Even before the signs have become apparent, damage begins years before. The other parts of the brain may respond to the loss of nephrons in an unpredictable manner and by the last stage, the brain has shrunk exceptionally.

Research has been working on the cause of Alzheimer's disease, as influenced by two proteins:

Plaques. Plaques are the protein deposits called beta-amyloid between the spaces in the nerve cells.

Tangles. They are twisted fibers of another protein called tau that builds up inside cells.

It is believed that these two proteins disrupt the communication among nerve cells and destroys the processes that allow the cells to live. The death of nerve cells results in poor memory, personality disorders, problem in doing daily chores, and other signs.

Age: Increasing age is the most common risk factor for Alzheimer's disease.

If you have a first-degree relative with Alzheimer’s, you are likely to get it. It is the genetic mutations in the genes that result in Alzheimer’s disease.

Many people with Down syndrome also develop Alzheimer’s disease.

Women are more prone to get Alzheimer’s disease because they generally live longer.

Alcohol consumption in excess is also related to depleting the functioning of brain cells, one of the major causes of Alzheimer’s.

If you have had a head injury, your risk of Alzheimer’s increases many times.

Research has explained the link between poor sleep and a decrease in memory.

Our lifestyle habits have an impact on decreasing brain functioning. Heart disease is also linked to the risk of Alzheimer’s disease in many. These include inactivity, hypertension, obesity, high cholesterol, poorly controlled diabetes, to name a few.

Ayurveda is an old science that has solutions for a broad spectrum of diseases, including Alzheimer’s. It is wholly based on the concept that our emotions have an impact on our bodies. Using this perspective, Ayurveda takes into consideration various factors before determining the treatment approach.

Ayurveda distinguishes the body on the basis of doshas -Vata, Pitta, and Kapha. The dominant part of the doshas reflects our body type and the disease we usually attract or are bound to get. So, during treatment, solutions are curated based on the aggravated doshas to ensure you experience your best health.

Various herbs in the treatment ensure slowing down the brain aging process and enhancing memory.