WHAT IS PSORIATIC ARTHRITIS? 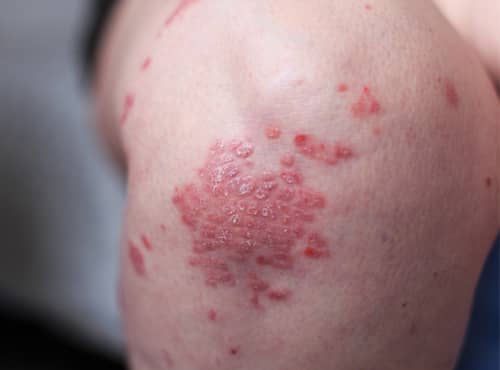 Psoriatic arthritis is a form of arthritis that largely affects individuals with psoriasis. Psoriasis is a condition in which red patches appear on the skin and scalp.

Psoriatic arthritis or PsA is a condition of the autoimmune form of arthritis that causes joint inflammation followed by itchy and red patches on the skin.

Pain, stiffness, and swelling in the joints are some common signs to tell you of psoriatic arthritis. PsA can affect large or small joints, including your fingertips, but less commonly, it also affects the spine. Just as in psoriasis, the signs may flare up with periods of remission.

There are five types of PsA.

Around 50% of people experience this type of PsA. In symmetric PsA, the same joints on both sides of the body are affected, such as left and right knees, on both sides. The symptoms are similar to that of rheumatoid arthritis.

It tends to be milder and cause less harm to the joints than RA. But may leave you disabled.

Asymmetric PsA affects joints in one side of the body. Your joints may appear sore and turn red, though the signs can be generally mild. It affects around 35% of people.

This type of PsA involves the joints near the nails. These are known as the distal joints. It occurs in around 10% of individuals with PsA.

Spondylitis PsA affects the entire spine- from the neck region to the lower back, making movement difficult and painful. Progressively, the joints in the feet, legs, hips, and arms may also be damaged.

This is a serious type of PsA affecting only 5% of people with PsA. The damage usually begins in the hands and feet, along with discomfort in the neck and lower back.

Skin: Itchy patches on the skin that appear to be red or white due to the buildup of dead skin cells. The most commonly affected parts include elbows, knees, and scalp, though rashes on the skin may appear anywhere else on the body. It is a generalized myth that these patches can be contagious, but this is not true.

Foot pain: Pain at the points where the tendons and ligaments attach to the bones in the foot, likely at the back of the heel or in the sole of the foot, called plantar fasciitis).

Nails: Cracking, white spots, and nail lifting are some of the common signs of PsA.

Joint pain: The joint pain may make moving your hands and feet a problematic job. In peripheral arthritis, the symptoms such as pain and tenderness may appear on both sides of the body. Your one toe or finger may swell up, making it hard for you to hold onto things and bend. This is called dactylitis.

Enthesis (plural, entheses): Psoriatic arthritis can inflame the connective tissues called entheses. Entheses attach tendons and ligaments to bones, so this inflammation is called enthesitis. Pain due to enthesitis radiates to a wider area and not just inside a joint. The affected area may cause pain even with just light pressure. Your knees, hips, elbows, and chest are also affected by enthesitis.

Fatigue. It is common to experience fatigue and fever during psoriatic arthritis due to joint inflammation. Symptoms may flare up with periods of remission. The flare may last for days or months.

If you have psoriasis and you are experiencing joint pain, make sure to consult your doctor. If not managed well, psoriatic arthritis may leave your joints damaged.

Psoriatic arthritis occurs when the faults in the immune system begin to attack healthy cells and tissues. This abnormal response by the immune system results in inflammation of the joints and too much production of skin cells.

Though the cause why the immune system does that is still not known, probably, it is genetic and environmental factors that play a role.

Triggers in the environment, such as a viral or bacterial infection, resulting in psoriatic arthritis in people with an inherited tendency.

Your age. Although psoriatic arthritis can occur at any age, adults who are between the ages of 30 and 50 are more prone to PsA.

The application of Panchakarma makes sure that the disease doesn’t progress further and the causes take a halt at the initial stages.

Other procedures are also used in the treatment of psoriatic arthritis for the health betterment of patients.