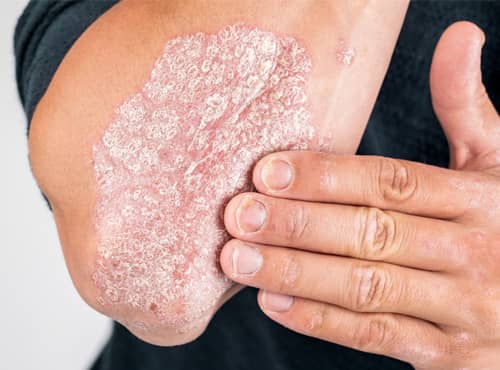 Psoriasis is a chronic autoimmune condition that allows skin cells to multiply and build up underneath, thereby forming bumpy red patches covered with white scales. The skin cells multiply many times but rise to the surface.

Inflammation and redness around the skin or scales can be experienced by an individual. The patches can appear to be whitish-silver and develop into red patches. Over time, these patches may bleed or burst fluid.

Typically, the skin cell has a life cycle of one month, but during psoriasis, this cycle happens in just a few months. Eventually, they don’t get time to fall off, resulting in their overproduction.

The scales or patches may typically appear on joints such as knees or elbows while other body parts are also affected, including:

Less commonly, your nails and mouth and the areas around the genitals are also affected.

Psoriasis may also come up in response to other conditions such as:

There are several types of psoriasis, including:

The symptoms of psoriasis may differ from person to person and depend on the type of psoriasis. Area of psoriasis can be small initially but may cover the entire body within the span.

The most common symptoms of plaque psoriasis include:

Scientists do not know what exactly causes psoriasis, but it is believed that the immune system and genes play a great role in their development. Even if you don’t have a family history of psoriasis, you still can develop it due to the presence of abnormal genes.

For those with genetic predisposition, an onset of triggers may result in the occurrence of signs and symptoms. Common triggers may include:

Stress and psoriasis often go hand in hand. Stress may cause psoriasis while its flare may also cause stress.

Changes in weather may also trigger the signs of psoriasis.

Psoriasis may appear on the skin which is damaged or injured.

Conditions that affect the immune system can trigger psoriasis such as bronchitis, respiratory infections, tonsillitis, etc.

Other possible triggers include

According to Ayurveda, Psoriasis or Kitibh Kust is a result of Vata, Pitta, and Kapha aggravation. The intake of an unhealthy diet leads to toxins accumulation which affects the basic doshas and the equilibrium state of the body. It is Vata that causes pain, dry and scaly skin when it gets aggravated. Pitta vitiation results in feeling, redness, and inflammation, etc., on the skin. From the onset of signs, it is concluded which dosha is predominant in the body, and customized medications are curated for an individual.

Along with medications, patients are also suggested therapies and procedures to detoxify the body of its roots.

Panchakarma therapies are employed in the process, followed by Shodhana Chikitsa and other therapies. Shamana Chikitsa refers to internal and external applications of medications. All the procedures are done on a regular basis to help the body get rid of wastes and other substances and boost immunity.

Ayurvedic treatment for psoriasis also relates to a healthy diet and yoga to slow down the progression of signs and symptoms.

Altogether, the treatment focuses on the management of psoriasis using natural elements only.

At AyuKarma, we are dedicated to helping you in your disease recovery using procedures offered by Ayurveda. Our treatment is highly authentic and natural to be endured by the patients.