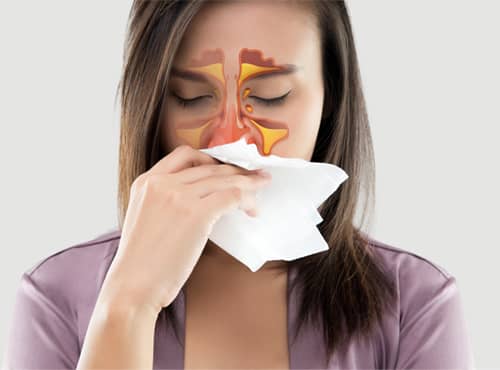 Sinusitis is an inflammatory condition of the sinuses that cause the tissue lining the sinuses to turn swollen or inflamed. Sinusitis is usually triggered by colds or allergies or bacterial or viral infections. Likely the infection results from the blockage.

The sinuses are small air pockets located behind the forehead, cheekbones, and in between the eyes. It is the sinus that generates mucus, a gummy substance that ought to protect the body by trapping the germs. But sometimes, allergens may cause too much production of mucus, which then starts to block the openings of the sinuses.

It is common to have mucus in excess when you have allergies or colds. But if there are recurrent viral or bacterial infections, this mucus may encourage bacteria or germs to build up in the sinus cavity, further leading to viral infections.

Most sinus infections go on their own within 10 to 15 days without treatment. If your symptoms do not improve within 1 to 2 weeks, you may probably have a bacterial infection.

Acute sinusitis occurs for a short time span. Viral infection by a common cold may last for 2 weeks, but in the case of a bacterial infection, this form of sinusitis may typically show signs for up to 4 weeks. Seasonal allergies also trigger acute sinusitis.

The signs and symptoms of subacute sinusitis can last for up to three months. This condition commonly develops due to bacterial infections or seasonal allergies.

Unlike subacute sinusitis, the signs of chronic sinusitis last longer than three months. Usually, the cause is bacteria infection, allergies, or nasal structural problems. Often, such a type of sinusitis appears to be less severe.

Sinusitis can be the result of various factors, but the certain cause is fluid, trapped in the sinuses, allowing germs to grow.

The common causes that trigger sinusitis include virus or bacterial infection. Perhaps, allergies, pollutants in the air, chemicals or other irritants, or medical conditions like asthma also cause sinusitis.

A sinus infection can occur in all ages in people who have nasal allergies, nasal polyps, asthma, and inappropriate nose structure.

Indications of sinusitis are similar to those of a common cold. They may include:

For children, the signs and symptoms of sinusitis may be hard to diagnose by parents. The signs usually include:

The signs of acute, subacute, and chronic sinus infections appear to be similar. However, the severity of the condition and duration of the signs may vary.

Sinus can affect people of any age or gender. In Ayurveda, sinusitis is due to aggravated Kapha and Vata balance in the sinus area. Shleshaka Kapha also gets mixed with doshas in the body, resulting in sticky mucus.

The ayurvedic treatment usually includes softening and releasing of vitiated doshas, with the use of potent internal medications, diet, as well as therapies involve to detoxify the body of waste.

Nasya is one of the best therapeutical procedures to treat sinusitis. It is one of the five therapies as penned down in ayurvedic texts.

At AyuKarma, we use this procedure with the help of a medicated oil or powder to clear the accumulated mucus. The oil is administered into the nasal passages that promote the healing of the nose and sinus area. Nasya

A rigorous head massage and steam inhalation are applied to the head and face to get the most out of the procedure. Thus, the aim is to treat sinusitis without any surgery, but with the help of natural methodologies only.