WHAT IS Male Infertility? 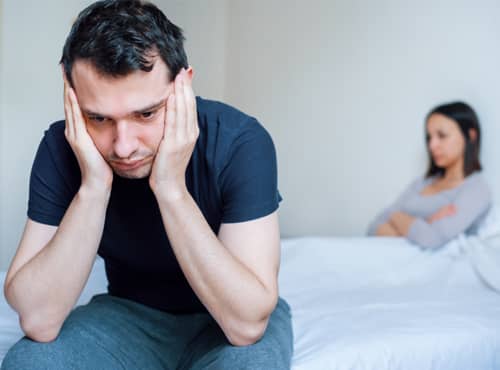 Male infertility is a health issue that lowers the odds of successful pregnancy among couples. Male infertility means not being able to get pregnant even after frequent, unprotected sexual intercourse for a year or longer.

Male infertility can result in low sperm production, abnormal sperm function, obstruction in the delivery of sperm. Diseases, injuries, chronic health conditions, lifestyle choices, and other factors are to be blamed for male infertility.

The inability to conceive a child can be stressful and frustrating; several treatment options are available for male infertility, however.

One of the apparent signs of male infertility is the inability to plan a baby. There may be no other obvious signs that can tell you about infertility.

If the cause is other conditions that have affected the health of the sperm, several signs and symptoms can be experienced, such as:

Consult your doctor if you have not been able to conceive a child after a year or more of unprotected sexual intercourse.

Or, in case if you have any of the following:

For men, a healthy and mature sperm count depends on many things. Many medical and nonmedical conditions interfere with the ability of men to produce healthy sperm. Sometimes, the problem is in the process of sperm mutating with the egg. Even the temperature of the scrotum can influence infertility.

Other conditions may include:

The most common cause of men’s infertility is with making and growing of sperm. Sperms not moving the right way

Problems in the sperm can be congenital as well. Lifestyle choices also result in decreased sperm count- such as binge alcohol consumption, smoking, substance abuse, certain medications can also lower the number. Other causes may include chronic kidney disease, infections, and chromosome or hormone imbalance (low testosterone).

Any disruption in the functioning of the reproductive system likely results in low sperm count. About 4 out of 10 men experience a total absence of sperm. Blockages in tubes through which the sperm travel, either due to a birth defect or infection, can also create problems.

The pituitary gland secretes hormones that instruct the testicles to make sperm. If there is any depletion in the number of hormones, poor sperm count can be witnessed.

The reason for retrograde ejaculation could be medications, surgery, or problems with the nervous system.

Varicoceles is an enlargement of the veins in the scrotum. They are more common to be seen in infertile men. Varicoceles veins affect sperm count by blocking the drainage of the blood. Varicoceles allow the blood to flow back into the scrotum from the belly. Varicoceles can also cause testicles to fail to develop normally or shrink, resulting in low sperm count.

Faults in the immune system allow antibodies in the body to attack its own sperm. Antibodies prevent the sperms from moving normally. Exactly what keeps the sperm from doing this is not confirmed yet, but they do lower fertility. They make it hard for the sperm to swim to the fallopian tube and fertilize with an egg. It is not a common cause of male infertility though.

The tubes through which the sperm travel becomes blocked, keeping sperm from leaving the body during ejaculation. Recurrent infections, surgery, defects since birth are certainly the cause of blockage in the tubes. Or any part of the male reproductive tract can be blocked, preventing sperms from moving freely.

It is the sperm that carries most of the DNA to the eggs. Changes in the structure of the chromosomes also affect fertility.

Certain medications or drugs can also alter sperm production, viability, and delivery, such as those taken for cancer or its treatment.

Male infertility is a common problem these days. As soon as a man reaches the age of 35, he starts to lose sexual desire and move towards infertility.

Causes of male infertility as per Ayurveda:

As you take ayurvedic treatment for male infertility at AyuKarma, you receive a full-fledged approach to move past with male infertility. The treatment works on your overall health, and the focus is on eliminating the root cause of the problem. Aahar and Vihar are also taken care of during the treatment to enrich the lives of the patients and to help them lead a contented life.