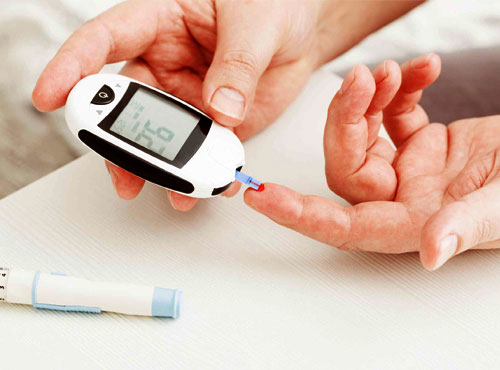 Diabetes is a condition that impacts the body’s function to process blood glucose, also known as blood sugar. Glucose is a source of energy for the cells that constitute your tissues and organs. Glucose or blood sugar is also vital for your brain to function properly.

Having diabetes means your blood sugar level is quite high than normal. If you have diabetes, it indicates that the pancreas in your body is not generating enough insulin or your body is unable to use insulin effectively. Insulin is a hormone that controls sugar levels in the blood. Hyperglycaemia is a common complication of uncontrolled diabetes that leads to damage to the body’s systems, especially your blood vessels.

Sometimes people refer to diabetes as “a touch of sugar” or “borderline diabetes.” This means a person really does not have diabetes, but management is still required. Ayurveda is one of the best methodologies to keep blood sugar in control and put off the comorbidities linked to the risk of diabetes.

The most common types of diabetes are type 1, type 2, prediabetes develops, and gestational diabetes.

Type 1 diabetes is an autoimmune disease, also known as juvenile diabetes. If you have type 1 diabetes, your body does not make insulin. Basically, the immune system begins to attack and destroy cells in the pancreas that produces insulin. Yet, the cause is unknown. It is usually diagnosed in children and young adults, although it can develop at any age. People with this diabetes are insulin-dependent, so they need to take artificial insulin to stay alive.

If you have type 2 diabetes, your body becomes resistant to insulin, and too much sugar starts to accumulate in the bloodstream. However, this type of diabetes occurs most often in middle-aged and older people. As per the National Institute of Diabetes and Digestive and Kidney Diseases (NIDDK), it is mostly linked to obesity.

Prediabetes develops when blood sugar is ostensibly higher than normal but not high enough to cause you to type 2 diabetes. In prediabetes, your blood sugar stays in the range of 100 to 125 milligrams per deciliter.

Gestational diabetes mostly occurs during pregnancy. During pregnancy, the placenta produces hormones that block insulin, which causes sugar to build up in the blood.

The signs and symptoms of diabetes tend to vary among people. Men with significantly high blood sugar can experience a low sex drive, erectile dysfunction, and poor muscle strength. On the flip side, women with diabetes can have symptoms related to urinary tract infections, yeast infections, dry and itchy skin, etc.

General symptoms of type 1 diabetes include:

General symptoms of type 2 diabetes include:

Each form of diabetes has a different cause attached to it.

Doctors do not know the reason that results in type 1 diabetes. Having said this, the immune system -which normally fighting bacteria and viruses mistakenly destroys the insulin-producing cells in the pancreas. Genes play a role in the development of type 1 diabetes in a large population.

For the occurrence of 2 diabetes, genetic and environmental factors are to be blamed. In many cases, being overweight is also linked to the risk of type 2 diabetes. Type 2 also runs in the family lines as the member of the family shares the genes.

In prediabetes, the cells become resistant to insulin, but the pancreas cannot make enough insulin to move past resistance. Ostensibly, the sugar builds up in the bloodstream instead of moving into the cells for use as energy.

This form of diabetes occurs due to alterations in the hormonal during pregnancy. The placenta secretes hormones that make cells in a pregnant woman less responsive to the effects of insulin. This can result in too much sugar in the blood during pregnancy.

Plus, women who are obese or gain too much weight during their pregnancy are more likely to develop gestational diabetes.

It is good to know that lifestyle, environment, and medical conditions can increase your odds of developing diabetes.

High blood pressure damages organs and tissues in your body. The higher your blood sugar and the longer you have been living with it, the greater is the risk for complications.

Complications associated with diabetes include:

Poorly controlled gestational diabetes can lead to problems in both the mother and the baby, such as:

The mother can also develop complications such as preeclampsia or type 2 diabetes, or hypertension. Often, the complications are so threatening that she may require a C section. In addition, the mother is exposed to the risk of gestational diabetes in future pregnancies.

There are twenty types of Madhumeha, commonly known as Diabetes mellitus, is one of them.

Ayurvedic treatment for diabetes begins with the purification of internal fragments of the body using Panchakarma procedures such as Vamana, Virechana, Vasti, etc., based on the severity of the condition.

Ayurvedic treatment is the best because it does not bring any hormonal imbalance in the body.

If you are looking for a natural treatment for diabetes, get to us!