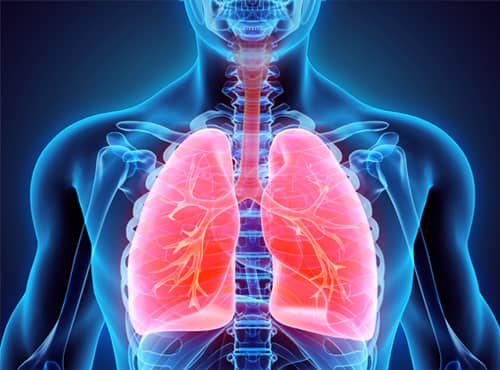 Lung diseases are the most common medical conditions affecting people worldwide. Genes, smoking, infections, etc., are mostly the cause of lung disease.

Your lungs are a part of a complex system, expanding and relaxing thousands of times each day to breathe in oxygen and breathe out carbon dioxide. If there is any problem in the functioning of the parts of the lung, you may experience problems in breathing.

Diseases that affect airways include:

It is one of the most prevalent forms of chronic lung disease. When it develops, the lungs turn swollen and narrow, making it hard for you to breathe normally. The generalized symptoms include wheezing and coughing, feeling tightness in your chest, inability to take in enough air, etc. See your doctor right away if you experience these signs. Triggers may usually include dust, stress, exercise, pollution, etc.

Those with COPD may have one or both of the following conditions:

Conditions that affect air sacs include:

The interstitium is a narrow lining between your alveoli. Small blood vessels that go through the interstitium allow gas to be transferred between the alveoli and the blood. The problem in the interstitium may sometimes become the reason for disease in the lungs.

The right side of the heart pumps blood into the lungs through pulmonary arteries. These arteries could be diseased as well.

The pleura is a delicate lining around the lungs and the inside of the chest. Sometimes, fluid may allow the pleura on the lung’s surface to move and slide along the chest as you breathe.

Some of such conditions include:

Your chest wall also plays an important role in breathing. It is the muscles that connect ribs to each other, helping the chest expand.

Conditions of the lung affecting the chest wall include:

An annoying cough while you are sleeping or in the middle of work explains a lot about your lungs. Though the signs can go from mild to moderate, you shall make an appointment with your healthcare provider as soon as possible.

Common signs may include:

Pollution may irritate your respiratory tract and cause problems in breathing by triggering cold and cough.

With changing seasons, you are likely to get infected with respiratory diseases.

If your immunity is low, you are more likely to get a lung infection quickly.

The irritants in the cigarette result in the impaired flow of oxygen to the cells.

In many cases, stress may also induce respiratory issues.

Unhealthy eating habits like too much fast food can hamper the digestive system. In response to this, the lungs do not get proper nutrients to work, which disrupts their function.

In Ayurveda, predominant Vata is responsible for respiratory disorders. The balance in life energies or doshas results in a healthy body. This Vata imbalance may lead to the formation and accumulation of toxins in the respiratory tract. Over time, Ama or toxins as produced may start to inflame the cells and tissues, resulting in the production of mucus, thereby blocking the lung tissues. So, the core of ayurvedic treatment for lung disease is to eliminate the waste through medicinal herbs and procedures. Along with this, diet and yoga also play a vital role in strengthening the function of the lungs.

At AyuKarma, we have induced evidence-based treatment methodologies to boost lungs and bring down inflammation by purging Ama or toxins.