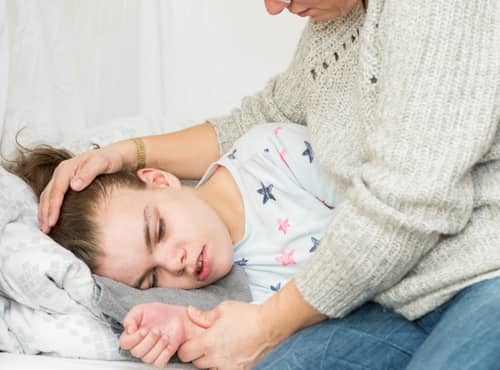 Epilepsy is changes in the nervous system of the body that affects brain activity, causing bouts of sensations, unusual behaviour, seizures, and loss of awareness. A seizure is a sudden rush of electrical activity in the brain.

There are two main types of seizures- Generalized seizures that affect the whole brain and focal or partial seizures, altering just one part of the brain.

You might not recognize mild seizures. It may last only a few seconds at the time of which you may lack awareness.

The symptoms of seizures imply differently to everyone. Some people can have spasms and abnormal muscle twitches. Others may lose consciousness with no memory of what happened. Having a seizure does not necessarily indicate epilepsy. At least two unprovoked seizures are generally required for the diagnosis of epilepsy.

Epilepsy can affect anyone. Both males and females are bound to be affected by epilepsy. It is slightly common in young children and older adults.

There are several reasons you might get a seizure. These may include:

Treatment with medications or can help manage seizures for the majority of people. In many cases, Ayurveda has helped people with seizures get away with it completely.

Seizures are the main symptoms of epilepsy. There are two different types of seizures

This type of seizure doe not lead to loss of consciousness. The general symptoms may include:

Complex partial seizures affect consciousness or awareness. Other symptoms include:

Such seizures affect the whole brain.

Post seizure, in most cases, a person does not remember anything, or he may remain ill for a few hours.

In less than half of the people, epilepsy has no rational cause. Some generalized triggers of seizures may include:

Genetic influence: Many types of seizures are influenced by genetics. There are certain genes that make a person experience signs of epilepsy. People who have a genetic predisposition may get seizures when triggers hit them.

Brain disorders: Disorders like tumours, strokes can also cause epilepsy. Stroke mostly causes epilepsy in people in their late 30s. Traumatic events such as head injuries or accidents may also put a person at risk of epilepsy.

Prenatal injury: Many newborns are at risk of brain damage when in the womb. The possible cause of this could be infections in the mother, oxygen deficiencies, poor nutrition, etc. Brain epilepsy often leads to cerebral palsy or epilepsy in children.

Infectious disease: Conditions such as meningitis, AIDS, viral encephalitis may trigger the symptoms of epilepsy.

Several of the risk factors may include:

In Ayurveda, epilepsy is called Apasmara, in which “Apa means loss, and “Smara” means consciousness. Epilepsy, therefore, is related to seizures which mean loss of consciousness.

The ayurvedic viewpoint of disease lies in the management of the three doshas, namely Vata, Pitta, and Kapha. The herbal concoctions are powerful enough to cleanse the body, pacify the doshas, and strengthen the production of neurotransmitters.

One of the inevitable advantages of Ayurveda is that it never goes wrong with the body. Only those herbs are employed in the medicine that helps to strengthen the brain and restore its function. Along with this, diet and lifestyle are also suggested to the patients so that your body does not get loaded with toxins while you are undergoing ayurvedic treatment.

At AyuKarma, we make use of the therapies and holistic procedures that are proven to be helpful for the patients, such as:

If you also need treatment for yourself or anyone in your family, let us know.