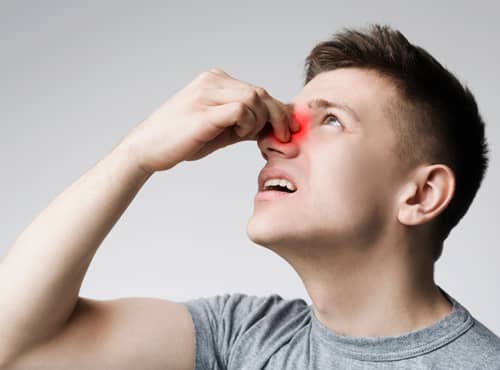 Epistaxis or nosebleeds is the loss of blood from the tissue that covers the inside of the nose. It is the minor bleeding in the nose that can cause discomfort. Mostly, it occurs in the children between the ages of 2 and 10 and older adults who turn out to be in their 50’s.

There are two types of epistaxis depending on their origin: anterior and posterior epistaxis.

Around 60% of people will have at least one nosebleed once in their life. The location of the nose in the middle of the face and close to the surface location of blood vessels in the lining of the nose are likely the reason for most of the targets.

The situation can be alarming, but most nosebleeds are not that serious and can be managed at home. However, it is good to consult a doctor in case you have frequent nosebleeds. Perhaps, this could be a sign of some other medical conditions.

Nosebleeds, which usually involve large blood vessels, results in heavy bleeding, especially if the bleeding continues for more than 20 minutes even after applying direct pressure on the nose.

Nosebleeds are classified based on the area in which bleeding occurs. There are two types of bleed:

Anterior nosebleed starts in the wall that separates the two sides of the nose. Capillaries in this front area of the nose are breakable and bleed easily. This type of nosebleed is very common and not so serious. They can be managed at home and mostly occurs in children.

This type of nosebleed occurs inside the nose, mostly in the blood vessels that appear closer to the throat and in the back portion of the nose. It can result in heavy bleeding, and so, therefore, you need immediate medical intervention. It usually occurs in adults.

A nosebleed can occur for a variety of reasons, such as dry air. The dry air can make the nasal membrane dry even more and cracked. This may result in bleeding, especially if you rub or pick, or blow the nose more frqeuently. frequentlyommon causes of nosebleeds include:

Other, less common causes of nosebleeds include:

Who may get nosebleeds?

A nosebleed can occur to anyone. Everyone will have at least one nosebleed once in their lifetime.

Likely some conditions put a person at risk of nosebleeds, including:

allergies, nose picking, and sticking objects into the nose can make them more vulnerable. On the contrary, adults between the ages of 45 and 65 are vulnerable. The cause is probably the use of blood thinners or drugs for high blood pressure or bleeding disorder.

Pregnancy. In pregnancy, the blood vessels in the nose expand, which pressurizes the lining of the vessels even more.

Nosebleeds usually begin in one nostril but may go up to both nostrils. In case of heavy bleeding during a posterior nosebleed, blood may flow back to the nose through the throat to the stomach.

The common signs at that time may include:

In Ayurveda, every disease has a classification based on the imbalance of doshas or life energies. The three energies that make the healthy constitution of a person are Vata, Pitta, and Kapha. In Ayurveda, a nosebleed is termed a Nakseer.

In the case of nosebleeds, aggravation of Pitta is the cause of bleeding. This aggravation, when mixes with the Rakta Dhatu cause epistaxis. It may be a standalone condition or occur in line with other conditions.

Ayurvedic measures are very helpful in the management of nosebleeds when the bleeding is heavy and preventive measurements are not working.

Herbal concoctions contain hemostatic herbs for internal and external application at the site of the bleeding.

At AyuKarma, we employ several ayurvedic methodologies to treat various conditions, ranging from mild to severe ones. Our treatment is 100% authentic and free of any downsides.

Here are some suggested preventive measures by AyuKarma for epistaxis:

Or, if you need any help, let us know.